Presented by the Edlavitch DCJCC, JxJ encompasses the Washington Jewish Film and Music Festivals, alongside a year-round film and music program.

JxJ’s year-round program consists of weekly events that take place at a state-of-the-art concert and cinema venue in the Edlavitch DCJCC on 16th and Q Streets. The annual Festival (May 11-21, 2023) is presented on stages and screens throughout DC, Virginia, and Maryland.

Between the Festival and year-round programming, JxJ annually attracts 30,000 patrons across 180+ events.

One of the largest and most respected Jewish film festivals in North America, the Washington Jewish Film Festival (WJFF) is an international exhibition of cinema that celebrates the diversity of Jewish history, culture and experience through the moving image. The WJFF was founded in 1990.

Established in 1999 with a lead gift from the Howard and Geraldine Polinger Family Foundation, the Washington Jewish Music Festival (WJMF) promotes a broad appreciation of Jewish culture through presentations of extraordinary performing artists who preserve and invigorate Jewish music in contemporary culture. 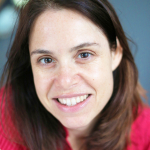 Yael is passionate about the power of film, music, and Jewish cultural arts to inspire audiences, create conversations, educate, and build community.

Prior to joining EDCJCC, Yael served as the programming producer at the United States Holocaust Memorial Museum. She produced live and digital programming to educate about the Holocaust inspiring audiences to confront hatred, prevent genocide, and promote human dignity.  Yael also previously worked as a documentary filmmaker and produced and directed six award-winning documentaries to engage and create social change.

Yael is a native Washingtonian and graduated from Charles E. Smith Jewish Day School and holds a B.A. from University of Rochester and an M.A. from London Film School. She is a parent of a Milton Gottesman Jewish Day School student. 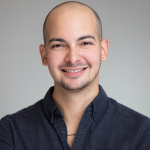 Alexis Rodríguez is the JxJ Managing Director. He has a background in arts marketing and is passionate about bringing organizations closer to their communities. Prior to joining the EDCJCC, he worked on grassroots marketing and public relations strategies at the Baltimore Symphony Orchestra at Strathmore. He also helped develop and manage their Brainiacs program, an audience engagement aimed at boosting retention among new subscribers. Alexis graduated from American University with an MA in Arts Management in 2015 and a BA in Marketing from the University of Puerto Rico in 2012. 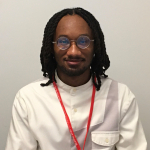 Elijah Jones is the JxJ Production Coordinator. Elijah holds a Bachelor of Arts in Broadcast Journalism from Hampton University and a Master of Arts in Television, Radio and Film from Syracuse University. He most recently spent 3 years in Tokyo, Japan as both a language teacher for ECC, the oldest foreign language institute in Japan, and a working artist for BnA (Bed and Art), a hotel company which features the work of artists in guest rooms and public spaces. A native of Silver Spring, Maryland, he started his professional career at CBS Television City in Los Angeles where he served as liaison between CBS executive staff and guests, coordinated audience interactions for shows and studio tours and other guest relations responsibilities. 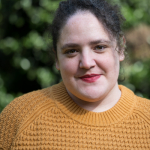 Lena Barkin is the EDCJCC Arts Marketing Coordinator. As a lifelong fan of film and the arts, she has previously worked as a freelance culture and academic writer, publishing both popular articles and book chapters. She also has a background in various live and filmed event productions. She graduated from Beloit College in Wisconsin with a degree in Creative Writing and received a Master of Fine Arts in Film and Television Studies from Boston University before returning to her DMV roots. 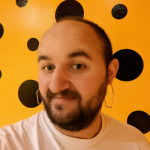 Jacob Ettkin is the Arts Outreach Coordinator for JxJ and Theater J. They identify as a fat, non-binary, transgender arts administrator, producer, and director and are passionate about using the arts as a tool for civic and communal connection. In past they’ve worked as a producer for Mosaic Theater Company’s High School Playwriting Competition, a Directing Fellow for Shakespeare Theatre Company, and the Artistic and EDIA Fellow at the Hangar Theater, building community partnerships and forging meaningful, non-transactional relationships. A proud Upstate New Yorker and recent graduate of Vassar College, they moved to DC earlier this year and are excited to get to know the city and the various communities that define it. 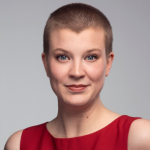 Originally from Tulsa, Oklahoma, they previously held a Marketing position at the VanTrease Performing Arts Center for Education, and they have worked extensively in box offices for Celebrity Attractions, BOK Center, and University of Tulsa. As a 2-spirit citizen of the Chickasaw Nation, they are passionate about serving the community and making art accessible for everyone.