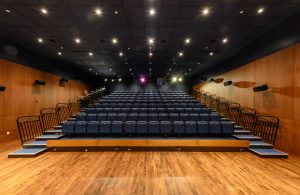 In early fall of 2019, JxJ—the combined Washington Jewish Film and Music Festivals—moved into the newly constructed Cafritz Hall, a state-of-the-art cinema space within the Edlavitch DCJCC.

The new 140 capacity venue features DCP projection, 7.1 sound and Dolby servers. Cafritz Hall is centrally located at 16th St and Q St NW, in the Dupont neighborhood of Washington DC. The space has a parking lot, and is easily assessible by Metro and several bus lines. It is also very walkable, bike-friendly and sits in a prime urban location within a 5 minute walk from 2 grocery stores (Whole Foods and Safeway), several coffee shops, eateries, and retail shops. 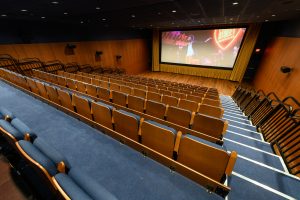 Additionally, each May, Cafritz Hall acts as one of the core venues of the annual JxJ Festival, which hosts more than 15,000 people across an 18-day celebration.

For the regular theatrical runs in Cafritz hall, JxJ aims to give exposure to independent filmmakers working in the Jewish and/or Israeli space.

One-off programming, WOM screenings, preview and gala events incorporate both Jewish programming and non-Jewish/Israeli films which are of interest to our core constituencies.