The JxJ Council serves as an advisory body, making recommendations to the Director, JxJ staff and EDCJCC Board and supports the department’s financial, programmatic and promotional efforts.

The Council plays an integral consultative role, augmenting the capacity of the staff and extending the department’s reach into the community. If you are interested in joining the Council, please email info@jxjdc.org for more information. Learn more about the members of the JxJ Council by clicking on their name below.

Sara Cohen is a native Washingtonian and practicing dentist in a 50+ year old D.C. family practice founded by her father and grandfather. Her grandparents were active members of the EDCJCC in its early days. Inspired by the combination of art and science in her work, she believes art and film in particular are the perfect emissaries to give voice to the Jewish experience. She is an active fundraiser for Jewish education and culture, working with the development office of the Charles E. Smith Jewish Day School and the Capital and Endowment Campaign Committee of the DCJCC. She is married to Norm J. Rich, Vice President of the DCJCC and with four grade school children, is doing her best to create Jewish leaders of the future!

Janet Abrams is Director of Strategic Initiatives in the Smithsonian’s central digital technology group, working to share the Institution’s vast collections, research, and educational resources with the world.  An Atlanta native, Janet earned her B.A. in History at Harvard and an M.B.A. at Stanford.  She serves on the EDCJCC Board of Directors and also holds leadership roles with the White House Fellows Foundation and Association and Girl Scouts of the Nation’s Capital.  Janet is excited to be part of the JxJ Council because she believes in the power of music and film to inspire, inform, and bring people together.

Michele Berman is a long time board member of the EDCJCC where she has been active with Theater J and former co-chair of its Council, the J’s annual Gala, Nominating Committee and Executive Committee. She also serves as a Vice Chair of the Arena Stage Board of Trustees. She is very excited to be working on this 25th anniversary year of the film festival.

Charles recently retired from the fulltime practice of law, where he was a principal partner at Yablonski, Both & Edelman, a Union-side Labor Law Firm, which he founded in 1975. His practice was on behalf of working people and their organizations and included international human rights and political work in the former Soviet Union, primarily in Kazakhstan. He is an active member of Adas Israel Congregation, a previous Board member and committee chair. He fondly remembers swimming at the “J” while attending Georgetown Law Center between 1965-1968. He currently volunteers at the United States Holocaust Memorial Museum.

Morgan is the managing partner of Verdehouse, which she originally founded by finding underutilized real estate for artists, events and pop-ups in DC. Today, Verdehouse has evolved to offer creative solutions to real estate development challenges. Prior to exploring ways to connect creative and corporate communities, Morgan held diverse roles within architecture and interiors at Gensler, a global architecture and design firm. She is a LEED-accredited professional, on the advisory board for the Dupont Underground Arts Coalition and active with the ADL’s NextGen. Along with a variety of past roles within Young Leadership, Morgan is currently on the Board of Directors for the Jewish Federation of Greater Washington.

Dina Gold was born and raised in the UK and is now an American citizen living in Washington, DC. She is on the board of the EDCJCC and a council member of JxJ. She began her career at the Investors Chronicle in London as a financial journalist after postgraduate studies at London University and Corpus Christi College, Oxford. She later worked as an investigative journalist and television producer at the BBC.

A native of Havana, Cuba, Manny spoke Spanish and Yiddish when he arrived in the U.S. at the age of 3. He has forgotten nearly all of the Spanish but, growing up in a Yiddish-speaking home, he developed a love for the mamaloshen and Yiddish culture.

Manny retired in 2017 after a 44-year career in journalism, the last 30 of which were spent at Kiplinger’s Personal Finance magazine. Since 1981, he has been a member of Adas Israel, where he regularly leads weekday services, serves as a member of the Budget Committee and has twice chaired the synagogue’s Investment Committee.

Richard Solloway has worked with nonprofits as a grantmaker, consultant, board member and active volunteer for over 40 years. He is President of Solloway & Associates specializing in strategic planning and grants management with a foci on federal grants and international programs. He is a former Board Member of the EDCJCC. Richard has a particular interest in exploring Jewish culture throughout the world and is excited to bring his interests to WJFF. He is a retired Foreign Service Officer and has lived and travelled extensively outside the US.

Susan Rubin Suleiman is Professor Emerita of French Civilization and of Comparative Literature at Harvard University, where she taught for more than 35 years. She is the author of many articles and books about modern literature and culture, including the Némirovsky Question: the Life, Death, and Legacy of a Jewish Writer in 20th-Century France and the memoir Budapest Diary: In Search of the Motherbook. Her book reviews have appeared in The New York Times, The Boston Globe, Moment, The Atlantic, and other popular publications. In 2018 she was awarded France’s highest honor, the Légion d’Honneur.

Asher Velasco is a native of Rhode Island and has lived in the D.C. area for the past five years. He is the founder and Principal Director of Corvus Nidum Consulting, a DC based data analysis and data management firm. Asher is a board member of ACCESS DC, the young professional leadership program of AJC. He is also a member of Mesorah DC ,and has enjoyed volunteering for the Washington Jewish Film Festival and was named Volunteer of the Year in 2017.

Heidi L. Wachs, Vice President at Stroz Friedberg, an Aon Company, helps clients prepare for and respond to data breach and cybersecurity incidents and develop and implement data privacy and information security programs. Wachs, whose experience includes serving as a technical analyst and Chief Privacy Officer for a major research university, frequently speaks and writes on data privacy, information security, information governance, and best practices for data privacy and breach response. She is a co-founder of 3GDC, a DC-based group for grandchildren of Holocaust survivors, and the WanderingJews, a project to document Jewish history, people, and places around the world.  She is an active member of Mesorah DC.

Diane (pictured on her way to see Avatar) spent her childhood seeing movies at the Capitol, Palace and Columbia theaters on F Street.

As a teen, her Saturday afternoons were spent at the Sheridan theater on Georgia Avenue. She saw her first Bergman film (Wild Strawberries) at the Takoma theater. And she still loves going to the movies.

Aviva Kempner’s career goal is to make films about under-known Jewish heroes. She produced and conceived Partisans of Vilna, wrote, produced and directed the critically acclaimed Yoo-Hoo, Mrs. Goldberg. Kempner directed, wrote and produced the Emmy nominated and Peabody awarded The Life and Times of Hank Greenberg and its new DVD version. She premiered her latest two films, Rosenwald (2015) and The Spy Behind Home Plate (2019) at the WJFF and regularly tours the country with them. In 2016, Kemper became a member of the Academy of Motion Picture Arts and Sciences. 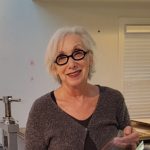 Miriam Mörsel Nathan co-founded the Washington Jewish Film Festival in 1990 with Founding Director Aviva Kempner.  In addition to her work as Festival Director, she served as a Juror for the Mayor’s Award for Films of the Jewish Experience at the Jerusalem International Film Festival and was Co-Curator of the Israeli Film Festival for the Kennedy Center Celebration of Israel’s 50th Anniversary. A poet and visual artist, Miriam’s work has been exhibited throughout the United States and is in private collections both nationally and abroad. 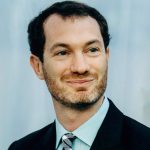 Ilya Tovbis was the Artistic and Managing Director of JxJ from 2012-2022. He became the Washington Jewish Film Festival Director in 2012, and took on managing the Music Festival in 2016; he was the founding director of JxJ. He has extensive programming experience in both the Jewish and broader film worlds, having previously worked with the San Francisco Jewish Film Festival, The Picture House, The JCC of NY’s Israel Film Center and the Mill Valley Film Festival.

Prior to coming on as the WJFF Director, Ilya was the Director of Programming at The Picture House, a historic arthouse cinema located in Southern Westchester. The theater annually attracted over 25,000 people to a varied selection of programming with a focus on international, documentary and independent film.