The 21%: The Lives of Arab Citizens of Israel

Join us for our 10th annual in-depth exploration of the daily lives and challenges of Arab citizens of Israel. Featuring a screening of Breaking Bread followed by a moderated conversation with director Beth Elise Hawk and Gazala Halabi.

Notes:
The film is only available to viewers in DC, MD, and VA. The conversation is available everywhere.
Pay-What-You Choose.
Watch the film on your own time between November 16, 2:00 PM – November 19, 12:00 PM, and then join for the panel discussion on Thursday, November 19, 1:00 PM.

Dr. Nof Atamna-Ismaeel—the first Muslim Arab to win Israel’s MasterChef—is on a quest to make social change through food. She founded the A-sham Arabic Food Festival, where pairs of Arab and Jewish chefs collaborate on traditional dishes like kishek (a Syrian yogurt soup) and qatayef (a dessert typically served during Ramadan).

A film about hope, synergy, and mouthwatering fare, Breaking Bread illustrates what happens when people focus on the person, rather than their religion, and on the public, rather than the politicians.

Lead Support provided by The Naomi and Nehemiah Cohen Foundation

Breaking Bread director Beth Elise Hawk will be joined by the most well-known female Druze chef and entrepreneur in New York, Gazala Halabi. The conversation will be moderated by Soupergirl co-founder, Sara Polon.

Registration for the discussion is included with your pay-what-you-choose film rental of the film Breaking Bread. The film will be available via JxJ’s virtual cinema platform from November 16, 2:00 PM – November 19, 12:00 PM. Watch the film on your own schedule any time before the panel discussion on November 19, 1:00 PM-2:00 PM. 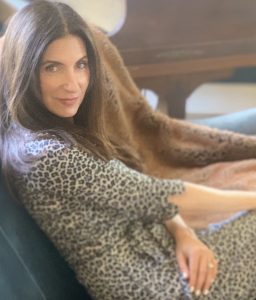 Before making the jump to the creative side, Beth was a Business and Legal Affairs executive at Walt Disney Studios in its feature film department, where she oversaw projects for its Hollywood Pictures, Walt Disney Pictures and Touchstone labels, including such productions as High Fidelity and Mystery, Alaska.  She received her Juris Doctor degree from N.Y.U. School of Law and a Bachelor of Arts from McGill University. 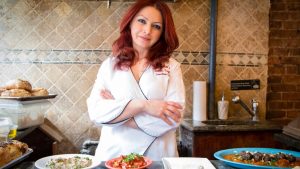 Gazala Halabi is the most well-known female Druze chef and entrepreneur in New York.  She grew with six siblings in Daliat el-Carmel, Israel’s largest Druze village, where her family operates a restaurant and her grandmother owns a spice shop.

Halabi’s business career began with a home-based catering company and a few years later expanded to two restaurants in Hell’s Kitchen and the Upper West Side.  Her restaurants feature typical Druze dishes as well as traditional Middle Eastern and Israeli fare, and she is widely recognized as “the chef who introduced Druze Israeli cuisine to NYC.” 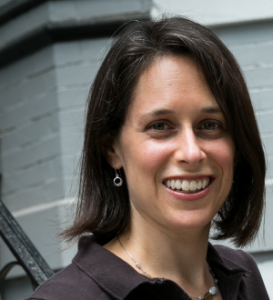 Sara Polon graduated from University of Pennsylvania where she studied history.

Her career path then took many meandering twists and turns including working at an Internet start up, leading tours through the Middle East, and several years as a stand-up comic in New York.

In 2008, after reading Michael Pollan’s book, The Omnivore’s Dilemma, she founded Soupergirl along with her mom, Marilyn Polon (aka Soupermom /Chief Anxiety Officer). Sourcing seasonally from local farmers, the company makes a wide variety of healthy, kosher, all-natural, vegan soups that can be found all over the east coast. You can find Soupergirl products at the company’s two DC area retail locations, Whole Foods stores from Kentucky through Virginia, Giant, Lidl, Wegmans, Peapod and Costco Warehouse from Massachusetts down to Washington, DC. The company also ships soup nationwide via their Souper Meals program.

Soupergirl has received national press, and has been featured in such publications as the Washington Post, Food and Wine, O Magazine, and more. The soup duo was most recently seen on ABC’s Shark Tank, NBC’s Today Show, and CBS’ The Dish.

Arab Citizens of IsraelFoodInter-faithMuslimPalestiniansWomen in Film

Pay-What-You-Choose tickets are available on Eventive, JxJ’s Virtual Cinema platform. Click through the link below to rent this event. To gain unlimited access to all JxJ Festival events, purchase a JxJ All Access Pass.