Among the great cinematic portraits of Jewish life in America, Joan Micklin Silver’s debut feature is anchored by her own screenplay (adapted from Abraham Cahan’s 1896 novella Yekl: A Tale of the New York Ghetto) and an unforgettable, Oscar-nominated performance by Carol Kane (2015 WJFF Visionary Award honoree).

Kane stars as Gitl, one half of an Eastern European Jewish couple alongside Yankel (Steven Keats). Upon arriving in New York’s Lower East Side in the late 19th century, Gitl finds that Yankel, who’d come over to America before her and their young son Yossele, has acclimated to their new country fairly well—but he has also begun an affair with a dancer, and Gitl finds herself in an unenviable situation in a strange new place.

Hester Street meticulously reconstructs this bygone haven for Jewish immigrants to masterfully paint one woman’s journey to assimilation and her arrival at the crossroads of tradition and modernity. A Cohen Media Group release. Restored in 4K in 2020 from the 35mm original negative by Cohen Film Collection at DuArt Media Services.

Presented in partnership with The Ciesla Foundation

Washington, DC based filmmaker Aviva Kempner makes award winning documentaries about underknown Jewish heroes for 42 years.  She just co-directed and co-produced Imagining the Indians, a documentary on  the movement to remove Native American names, logos, and mascots from the world of sports. Her The Spy Behind Home Plate is about baseball player and OSS spy Moe Berg. Kempner launched the  SEW: Sports Equality for Women website which strives to amplify the stories and voices of women in sports.

She made Rosenwald, a documentary about how philanthropist Julius Rosenwald partnered with Booker T. Washington in establishing over 5,000 schools with African Americans in the Jim Crow South. She also made Yoo-Hoo, Mrs. Goldberg, about Gertrude Berg who created the first television sitcom and Peabody awarded The Life and Times of Hank Greenberg, about the Hall Famer slugger who faced anti-Semitism during the 30s. She also produced the award-winning Partisans of Vilna, about Jews fighting the Nazis.

She is presently making a film on screenwriter, journalist and activist Ben Hecht,  who exposed the horrors of the Holocaust to the American public and helped bring survivors to a permanent Jewish home in Palestine. Kempner is also making Pissed Off, a documentary short exploring the struggles faced by female lawmakers in Congress who advocated for potty parity in the United States Capitol.

A member of the Academy of Motion Picture Arts and Sciences, Kempner is a voting rights and statehood advocate for Washington, D.C. and proudly serves on the board of DC Vote. 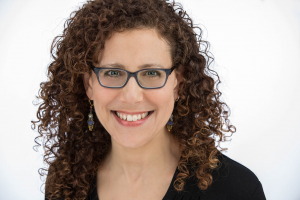 Dr. Lauren B. Strauss is Scholar in Residence and Director of Undergraduate Studies in the Jewish Studies Program at American University in Washington, D.C.  Her courses include ancient and modern Jewish history and literature, modern Israel, Israel & American Jews, Holocaust literature and art, Jews in American Popular Culture, Gender & Sexuality in Modern Jewish Life, and Jews & the American Political Tradition.   She lectures at venues all around the D.C. area and beyond, and serves as commentator at Jewish cultural events and in the press.  She holds degrees from Brandeis University (B.A.), and Yale University (M.A. in International Relations), and received her Master’s in Philosophy and her Ph.D. from the Jewish Theological Seminary.

Strauss co-edited the anthology Mediating Modernity: Challenges and Trends in the Jewish Encounter with the Modern World (2008).  Her forthcoming book is entitled Painting the Town Red: Jewish Visual Artists, Yiddish Culture, and Radical Politics in Interwar New York.  She has also begun her next book project, on the history of D.C.-area Jews and their political activism.  She has published widely, in both peer-reviewed journals and the press.

Strauss served as historian for a major exhibition on the history of the State of Israel, which opened at the Maltz Museum in Cleveland in 2018.  She has also consulted for the forthcoming Capital Jewish Museum, scheduled to open in D.C. in 2022.  From 2012 to 2017, in addition to her university teaching, Dr. Strauss was Executive Director of the Foundation for Jewish Studies, now called the Haberman Institute for Jewish Studies.

In addition to her own academic and professional pursuits, since 2018 Dr. Strauss has cochaired the Greater Washington Forum on Israeli Arab Issues.  She also serves on the Editorial Board of the Jewish Women’s Encyclopedia (part of the Jewish Women’s Archive), is a founding Board member of the Friends of Yad Tabenkin-Kibbutz Movement Archives in Israel, and is a founding member of Heart of a Nation, which encourages dialogue among Americans, Israelis, and Palestinians.