Pati Jinich: La Frontera and Treasures of the Mexican Table

This is a pay-what-you-choose event

After a screening of the first La Frontera episode, Jinich will be joined on stage by leading US-Mexico border expert Alfredo Corchado for a panel conversation moderated by EDCJCC CEO Dava Schub. Jinich will sign nameplates for those pre-ordering Treasures of the Mexican Table.

Born and raised in Mexico City, Pati Jinich is the host of the 3x James Beard Award-winning and 4x Emmy nominated PBS television series Pati’s Mexican Table going on its tenth season. The series is widely distributed in the US through PBS and streamed worldwide on Amazon Prime.

Jinich is the resident chef at the Mexican Cultural Institute in Washington DC and author of two cookbooks, “Pati’s Mexican Table: The Secrets of Real Mexican Home Cooking” and “Mexican Today: New and Rediscovered Recipes for the Contemporary Kitchen.” 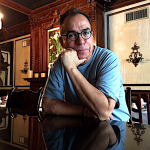 Alfredo Corchado Jiménez is a Mexican-American journalist and author who has covered Mexico for many years, and is currently the Mexico City bureau chief of The Dallas Morning News.

He is the author of Homelands and Midnight in Mexico.

Premiering this October, the two-part special follows Pati as she travels the border and explores the region through artists, musicians, athletes and local legends, whose work reflects the blending of Mexican, American and other cultures, as well as the chefs and home cooks who bring all these people together around the table.

Using food as a vehicle for exploration, Pati travels the imposing border landscape and visits El Paso, Ciudad Juárez, Laredo, Nuevo Laredo, McAllen and Brownsville, and delves into the rich, diverse and unique border cultures in each place. Along the journey, Pati, who received a master’s degree in Latin American Studies from Georgetown University, draws on her vast experiences — both as a former political analyst at a policy research center and the current resident chef of the Mexican Cultural Institute in Washington, D.C. — to conduct in-depth interviews about life on the border with locals in the region.

TREASURES OF THE MEXICAN TABLE

On November 23rd, Pati Jinich — who has dedicated her career to building a shared understanding between her two home countries of Mexico and the United States — releases her third cookbook, Treasures of the Mexican Table: Classic Recipes, Local Secrets.

The years-in-the-making book aims to shed light on some of Mexico’s lesser-known regional dishes, and is the culmination of Pati’s decade-long quest to share the best of her home country’s culinary treasures, as well as the people and stories behind them. With its wide range of recipes, historical context, and how-to cooking guides, Treasures of the Mexican Table is a versatile cookbook made for home cooks of all skill levels and culinary ambition.

Treasures of the Mexican Table will be published on November 23.

Pre-order today! Pati Jinich will sign nameplates at the event – these can be inserted in the cookbook once it arrives.

This is a Pay-What-You-Choose Event.